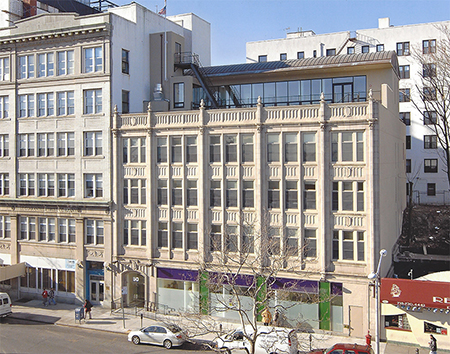 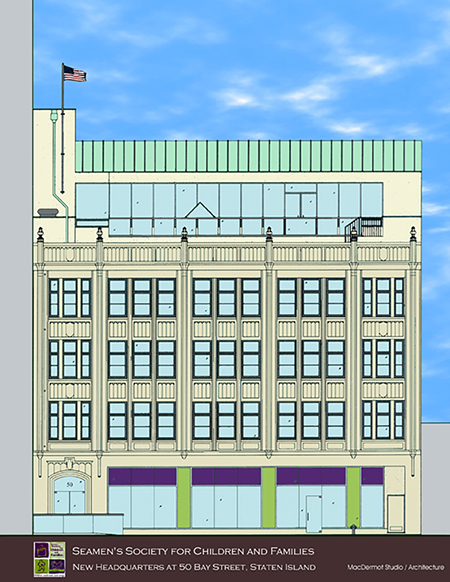 Headquarters for Seamen's Society for Children and Families

Seamen's Society for Children and Families was founded in 1846 to take care of the widows and orphans of sailors lost at sea. Seamen’s Society for Children and Families stayed relevant by adapting to the needs of New York City society. Today it offers 12 programs directed to helping New York children and families. The programs range from Foster Care and Teen Mother Schooling, to Domestic Violence counseling and AIDS prevention. 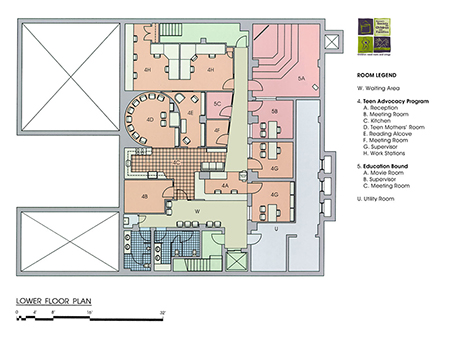 In 2002 Executive Director Jerry McCaffery calculated that within 5-10 years the projected rent increases would require the organization either to move or cut back its services. He began to look for a facility to purchase. Mr. McCaffery located an abandoned building one block from their original address that offered the same benefits of the location; two blocks from the Staten Island Ferry Terminal, the Staten Island Rapid Transit train line and all Staten Island bus routes. 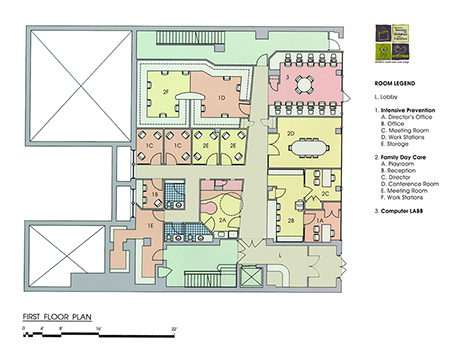 The design goals for the facility were: To establish a facility that Seamen's Society would own. To house their 12 programs with enough flexibility to allow them to deal with ever changing staffing and funding requirements. To attract good staff. Seamen’s Society could offer a prospective staff member an opportunity to work in a well run organization in a pleasant work environment. To serve as an attractive symbol for the Seamen’s Society for Children and Families. Located as it was on the busiest downtown street, the location offered the potential of raising the visibility of Seamen's Society and the services they offered. 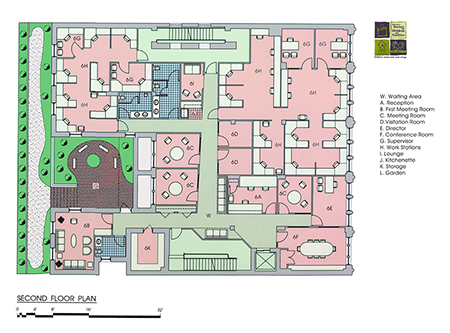 BUILDING DESIGN
The first three steps of the design process were the research into the history of the building, conducting interviews of Senior administration and 12 Department heads, and research into the zoning and code requirements for the proposed work. A questionnaire and interview were given to Senior Staff members and each Department Head by the architect. The result was a litany of requests ranging from more even heating and cooling, to good sound protection for confidential meetings, lounges for the staff and a request for more conference rooms. 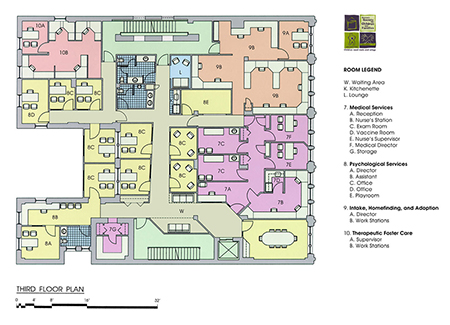 There was an allowable 3000SF to expand. Space was added to several floors levels at the rear of the building. The balance was used as a new fifth floor rooftop meeting room. Boston Valley Terra Cotta was retained to provide new terra cotta tiles. A review of the façade was conducted and over 100 tiles that had been damaged or cracked were removed, recast and reinstalled. The ground floor storefront had been altered in the 1960’s. This addition was removed and replaced with a butt glazed glass system using a stainless steel exterior finish. The glass panels at the column lines and the horizontal transoms were laminated with colored glass reflecting the colors of Seamen’s Society’s logo and backlit. 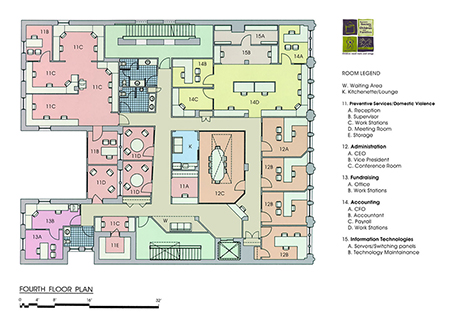 Interior designs consisting of plans and freehand sketches were presented to Jerry McCaffery and the senior staff. Mr. McCaffery in turn presented the designs to the Department Heads. Designs were modified based on these comments. Every floor was created as a self sufficient separate entity. Every floor has a reception area, a conference room adjacent to the elevator, open work spaces and private offices. Every floor has its own set of bathrooms, lounge and kitchenette. A floor could be leased to a third party if that necessity ever arose. Seamen’s Society has 150 staff members. Space ratio is 200SF per staff member. A color-coded pattern was established for different uses; open work spaces used several shades of blue, private offices used a range of yellows, executive offices yellow and orange. Children’s spaces used colorful floor tiles and wall colors. 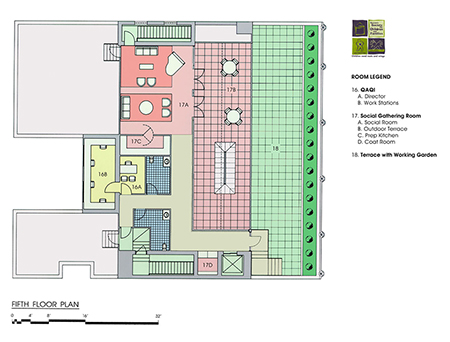 Seamen’s Society gathers its staff from all locations into one place for periodic meetings and fund raisers. This takes place in the new rooftop space with views of New York Harbor, New York City and the Verrazano Bridge. The effect on the community has been to serve as a catalyst for interest and development in the area. Jerry McCaffery secured a low-interest bond financing available to non-profits. The net result in terms of cost, the initial motivating factor, is that the Seamen’s Society for Children and Families now work in and own a state of the art building that enables them to accomplish all their goals while paying less annually than their pre-existing rent. 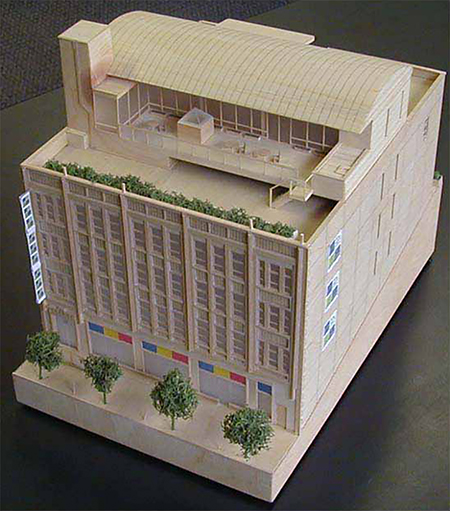 Basswood model of Seamen's Society for Children and Families. 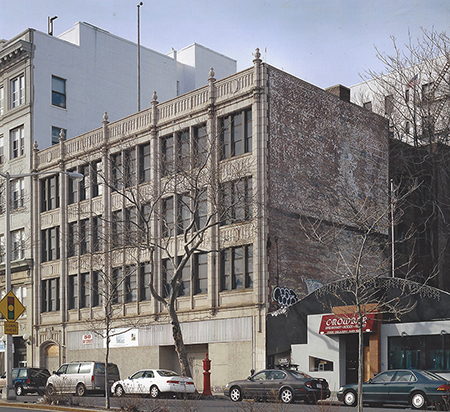 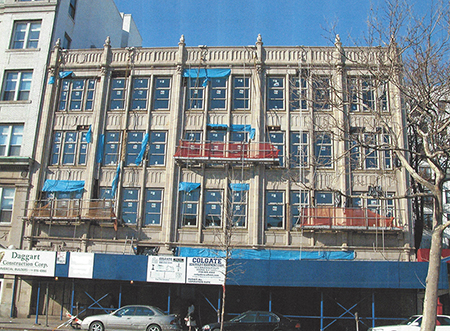 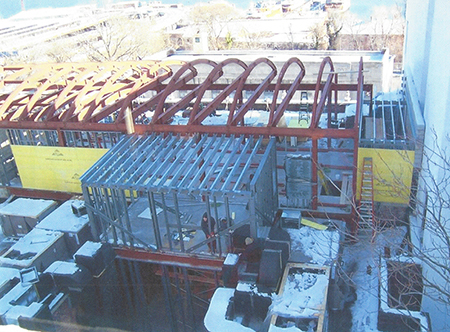 The original building was built as a speculutive office building in 1925 by the Pentz Organization from Manhattan. The original architect was James Whitford, a well respected Staten Island architect. Whitford's original plans were in the possession of the elder statesman of Staten Island architecture Albert Melniker and offered to Mr. MacDermot. The original plans indicted a possible future development of two additional stories. The renovation as designed and built included the addition of a partial fifth floor with views of NY Harbor and the City. When the building was originally built there were 90 companies producing terra cotta tiles. When the renovation was undertaken only two in the country remained. Boston Valley Terra Cotta of Orchard Park, NY provided the repair and replacement of over 100 terra cotta tiles in the front facade. 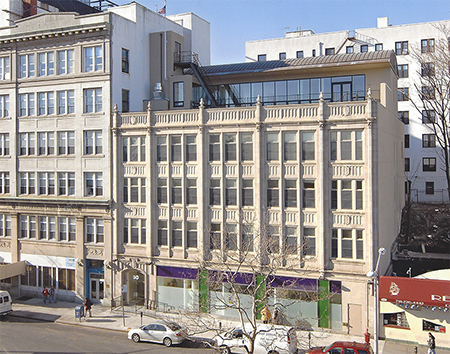 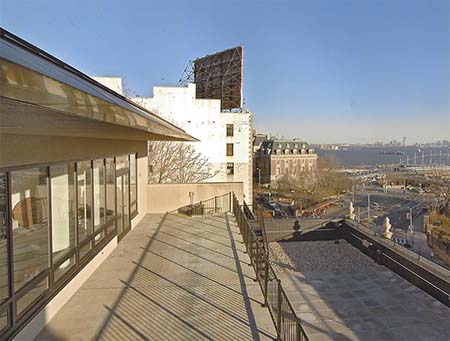 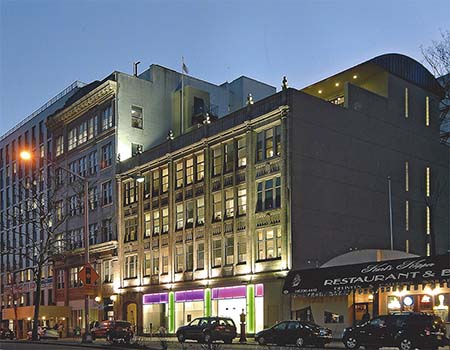 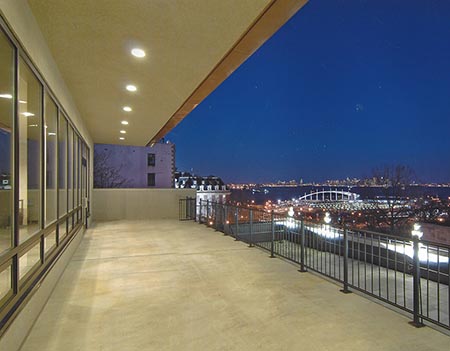 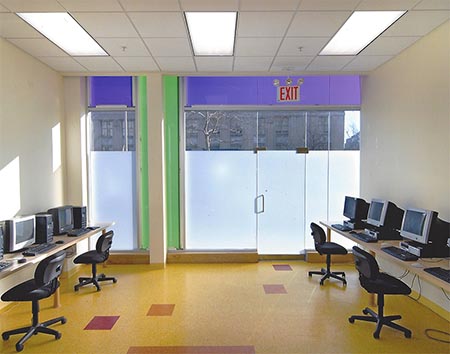 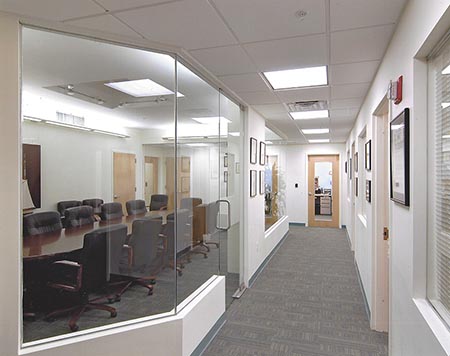 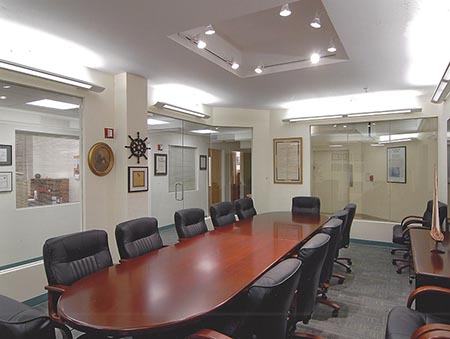 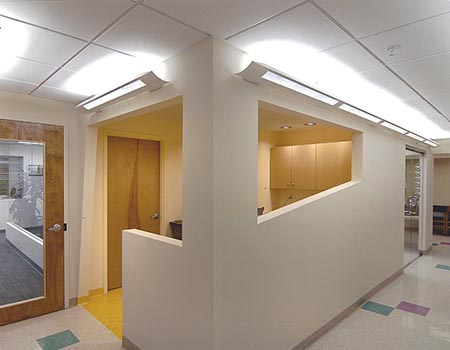 Every Floor has a Self Contained Kitchen and Refreshment Area 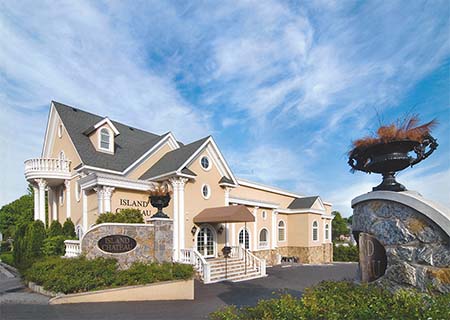 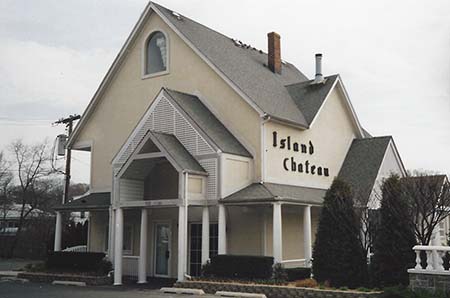 Island Chateau is a second generation Catering Facility on Staten Island. The family had established their excellent reputation by concentrating on only one function at a time, giving their undivided attention to that one party. 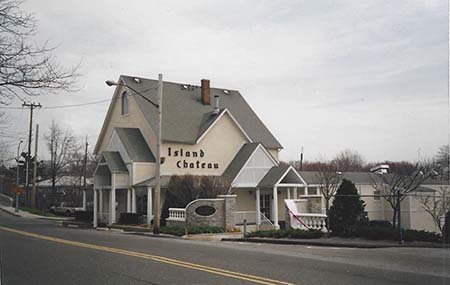 The owners came to Mr. MacDermot with a good problem. The children of people that were married there or that had parties at Island Chateau were coming to the catering facility for their own weddings and parties. The new generation was looking for more excitement, more pizzazz. The owners said 'We need WOW!!' The existing building was a very functional, older building with three levels in the front portion of the building. The decision was made to concentrate on the experience of people arriving at the facility. 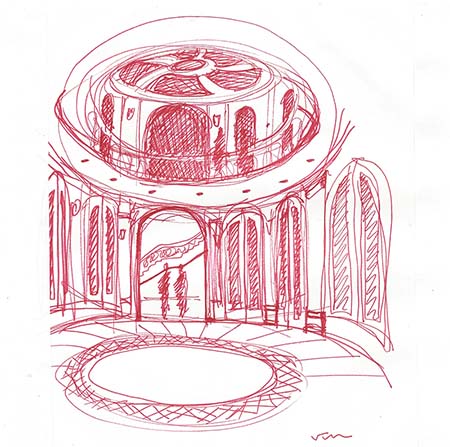 Mr. MacDermot's design called for the removal of floor area within the existing front portion of the building space and the creation of a three-story high circular entrance foyer with a gold leaf dome at its peak and a wrap around balcony encircling the second floor level. In addition to the three story circular entrance, the lobby was completely renovated at the ground level to provide a large gathering space and the upper level upgraded with new facilities for the wedding party. 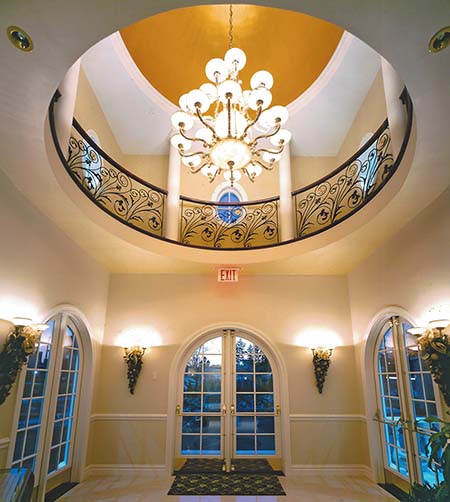 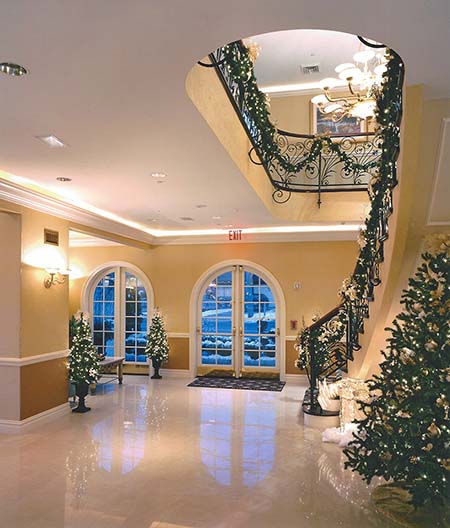 PHASE 2 - The Second Phase of Renovation When the first phase of construction was finished in which the entrance was transformed to an exciting place and the two level lobby finished in high end materials, the young couples asked for the remainder of the building to match the excitement of the entrance space. 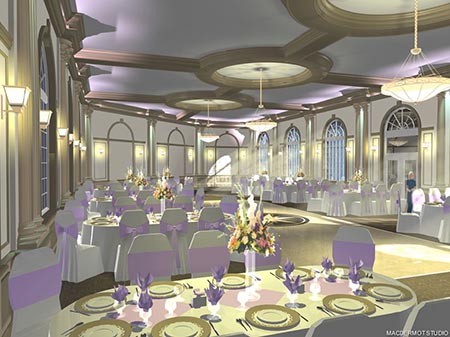 PHASE 2 - The Second Phase of Renovation

The facility has a large existing catering room. This rendering shows the new design in which the ceiling was removed and the height of the Main Catering Room doubled to provide an elegant, classical space with columns and circular windows surrounding the dining and dancing area. 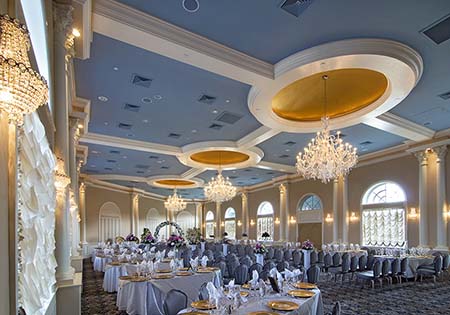 The finished room after completion of construction and finishes. Interior colors and material provided by Susan Arann of American & International Designs. 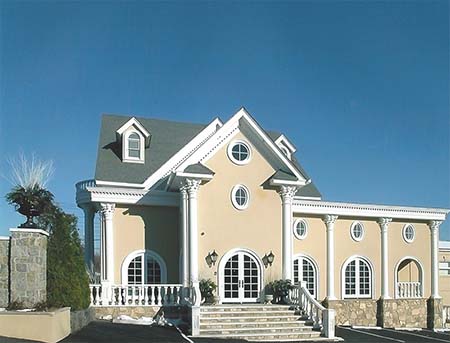 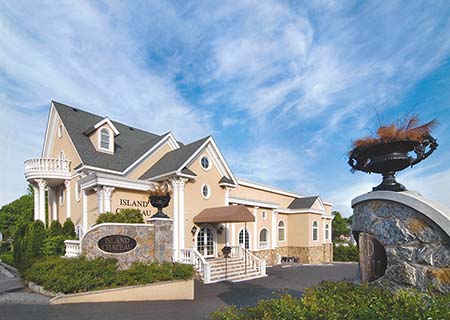 Island Chateau has a great reputation based on the practice of the family concentrating on only one event at a time, giving their undivided attention to the event of the evening. The family and their new facility is accommodating another generation of weddings and happy events.